Communing with Wizards in Myanmar

Communing with Wizards in Myanmar

When I came back to Myanmar seven months ago, I decided to dedicate myself to improving my language skills. When friends asked me *why *I wanted to improve my Burmese, I told them that the main reason — other than the important matter of being able to order the very tastiest things on tea-shop menus — was that I wanted to talk with wizards.

My reply was not entirely flippant. Myanmar has a fascinating tradition of esoteric Buddhist practices. In Loikaw two years ago at the Taung Kwe pagoda, I stumbled across a Buddhist hermit, but my Burmese was too poor, and I was too unsure of myself, to talk to him. This seemed to me to be a terrible shame. I badly wanted to know what he was up to. But there was no way of knowing. So I decided that this time round, I should work on my skills so that the next time I stumbled across a hermit, a wizard, a soothsayer or the like, I would be properly prepared.

Studying Burmese has not been an easy task. But over the past months – thanks to hours and hours of labour, and the help of my excellent teacher Sayama Thu Thu – I have made some progress. Tea-shop menus no longer hold any fear. Taxi negotiations are unproblematic. I go to the market and chat with the aunties who are selling mangoes, potatoes, eggs and water spinach. And all this goes very well. But I have not been sure how I would get on with wizards. Until today, that is, when by happy accident I found myself at the remarkable Maha Hsay Wingaba (Great Medicinal Maze) Pagoda in the suburb of Insein.

I went to the pagoda with my Wind&Bones collaborator Hannah Stevens, and our friend Bochen Han. The temple complex was built in the 1950s. Not only is it home to many cats, and the site of a fiendishly difficult maze that is open to worshippers on special festival days, but it also houses the uncorrupted body of the Karen Buddhist wizard (weikza-do) U Thuriya. The maze (a maze rather than a labyrinth) is said to take up to a couple of hours to complete, and has a magical purificatory function, hence the name of the temple.

We spent an hour or so looking around the temple. Then, just as we were about to leave, a monk came up to say hello. He said he would take us  to meet U Thuriya. He led us up a flight of stairs to a shrine. And there, in a glass case, was the unembalmed, miraculously preserved body of U Thuriya, his face gilded with fine gold leaf. The caretaker, a friendly Karen woman beamed in welcome as we came in.

I wasn’t quite sure how to conduct myself. It is hard to know what to do when in the presence of the mortal remains of an immortal wizard-saint. But when I’m in religious buildings, a residual Anglican piety kicks in automatically (I blame my clergymen ancestors): I walk with a slight frown, I fold my hands thoughtfully, I tilt my head and nod. But the caretaker cajoled me out of my seriousness. ‘Just relax,’ she said as we circumambulated U Thuriya’s body. ‘Don’t worry.’ The monk also chipped in, switching briefly to English. ‘Be happy,’ he said, and he smiled.

The monk turned out to be the most generous and solicitous of hosts. After we had visited U Thuriya, he showed us around the rest of the complex. Every so often, he switched to English to say to us ,’ Be happy!’ 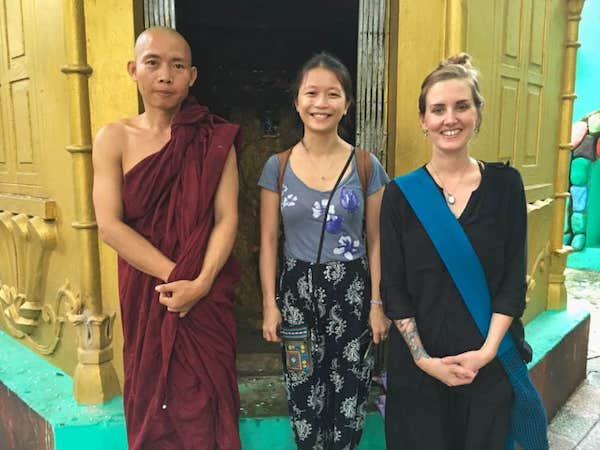 As we chatted in Burmese about the temple, and where I had come from, what I was doing in Burma, and whether I had any experience of meditation, I realised that I had, more or less, attained my goal. It was only at one remove, perhaps, and it was at the most basic of levels. But there I was, on my last weekend in Myanmar, communing with a bona fide Burmese wizard. Job done, at least for the time being.

But now, for a while, I’ll be packing away my Burmese books for a while. Until October, I’ll be in Thessaloniki working on my next book, Hello Stranger, which is due out in 2020 from Granta. Nevertheless, whilst I’m away, I’ll keep on working on my Burmese because I’m sure I’ll find myself back here before too long. Not only do I have so many good friends here, but it is hard to keep away from a place where a Sunday outing can turn into a lesson in wizardry.

If you want to find out more about the pagoda, there’s a great article in Frontier from a couple of years ago. Have a read here.

You can also read more about the Buddhist wizard or weikza-do tradition in the excellent Champions of Buddhism: Weikza Cults in Contemporary Burma by Bénédicte Brac de la Perrière, Guillaume Rozenberg and Alicia Turner (NUS Press 2014).